Don't be a bystander

Sometimes celebrated but most often persecuted, our forebears helped shape the world we live in today. It’s important to remember that, and specifically to teach young people about LGBT history. Not just to honour our contributions, but because engaging the hearts and minds of our youth — helping them understand our past — is absolutely key to achieving equality, compassion and respect for all in the future.

Don’t let same-sex marriage and hate crime legislation fool you: homophobia is very much alive and kicking (literally, sometimes) in our streets, schools and workplaces. Having a progressive Government at the helm here in Scotland is an amazing privilege, but it’s not something we can take for granted; we all still need to ask ourselves what we’re doing to make our community a better place.

Creating Jock Tamson’s Bairns was our way of celebrating where we come from and some of our heroes, while trying to start a conversation about homophobia and the bystander effect — the phenomenon whereby the more people who witness a crime, the less likely it is to be reported. We wanted to entertain people, but also encourage them to think about their behaviours, challenging them to overcome bystander tendencies.

Jock Tamson’s Bairns is an immersive show that explores universal issues around equality, belonging and finding your tribe, as well as growing up gay in Scotland in the 1990s. Set in an after hours gay bar, the show mixes scripted elements of storytelling with live music and drag performances, inviting the audience to speak their mind. 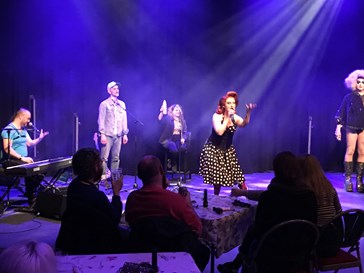 We’re almost halfway through our seven-gig LGBT History Month run now, and so far the response has been great. We’ve had lots of brilliant banter and powerful discussions with audience members in Dumfries, Paisley and Glasgow, and we’re looking forward to continuing the conversation in Glasgow and Edinburgh later this month.

Jock Tamson’s Bairns does go to some fairly dark places, but at its core it’s a joyous celebration of life, and loads of fun. If you’re within travel distance of Glasgow or Edinburgh, please come join the party at CCA or Assembly Roxy and make your voice heard.

Civil Disobedience is a team of producers/theatre makers, creating and supporting queer work and that addresses issues of inequality and injustice in the world. Led by Barry and Josef Church-Woods, the company is based in Edinburgh and collaborates with artists globally.