Announcing our theme for 2020

Every year, LGBT Youth Scotland co-ordinate and advertise community-run events to mark LGBT History Month. As winter approaches, we design an overarching annual theme to help spark event ideas, and this year’s marks the 20th anniversary of the repeal of Section 28 (Clause 2A) in Scotland.

‘What Have We Learned?’ will reflect on the multi-generational impact of the legislation which silenced teachers, preventing them from talking about LGBT issues in schools, and left thousands of young people without the support they so badly needed. It’s an opportunity to celebrate the steps we have taken to undo the legacy of Section 28 and make some bold commitments for the future. 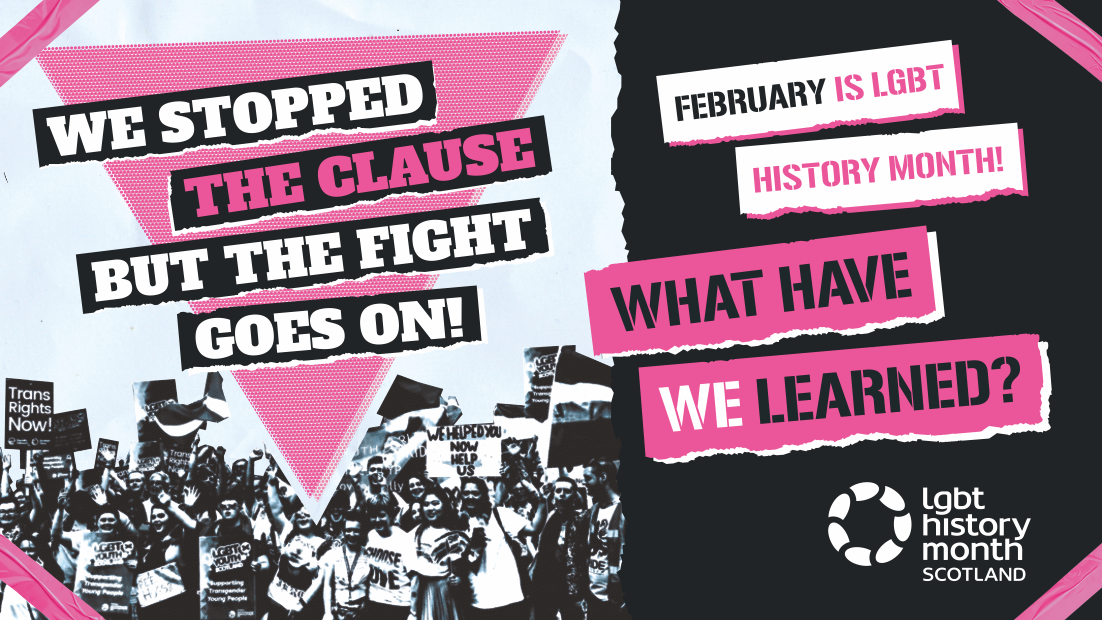 In 2019, a record 150 events took place during LGBT History Month from Stornoway to the Scottish Borders; encompassing everything from the Traverse Theatre’s run of Pride Plays to coffee mornings for over-50s in Aberdeen. We anticipate that we will reach an even bigger audience in 2020 as venues broaden their programmes and new event hosts, both big and small, come on board.

Our poster design for 2020 pays homage to the 1980s/90s ‘zine’ aesthetic that was adopted by so many campaigning flyers and posters from the time. The pink triangle, a long-held symbol of the oppression of LGBT people, takes pride of place against a backdrop of marching campaigners who could easily be from either the past or the present. We invite event hosts this year to consider what we have learned from our history and how we can use it to inform our future.

Section 28, introduced by Margaret Thatcher’s government as part of the Local Government Act 1988, banned the "promotion" of homosexuality by local authorities and in Britain's schools. The law was introduced when tabloid media coverage of LGBT issues was already largely hostile, particularly in relation to the AIDS crisis of the time, and ignited an angry fight back by the LGBT community. This included memorable moments such as when protestors abseiled into the House of Commons and when a group of lesbians interrupted a live BBC news broadcast.

After a decade of campaigning, Section 28 was repealed by MSPs on 21 June 2000 with a 99 to 17 majority vote, but the legislation left an enduring legacy. Guidance on what teachers could now talk about with their pupils was not forthcoming, leading to years of continued uncertainty about what was appropriate for discussion in school settings. It is only in recent years - thanks to the hard work of teachers, campaigners, charities and local authorities - that meaningful progress has been made in beginning to undo the toxic legacy of the law.

To read more about hosting your own LGBT History Month event and getting it featured on this website, head to our definitive guide. Download the poster for free from the Resources page of this website.