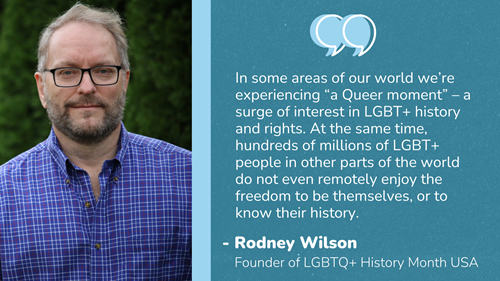 It started with the Italians.

Specifically, it started with five Italian academics and activists who, in September 2021, made a declaration at the Florence Queer Festival that the next April would be designated the first ever LGBT+ History Month Italia.

(April 2022 marks the 50th anniversary of a transnational demonstration of gays and lesbians from Italy, France, Belgium, Germany, and Great Britain, protesting against psychiatric homophobia exhibited at the International Sexology Congress in Sanremo, Italy.)

Learning about the Italian History Month effort was such exciting news for me that I reached out to the co-founders of the project to congratulate them.

A member of their team, historian Alessio Ponzio, wrote back right away (11 minutes later, to be exact) and asked if I’d be willing to have a Zoom session with the team to share my experiences in 1994 when I founded LGBTQ+ History Month USA – set in October in the States and originally called Lesbian and Gay History Month.

Out of that email correspondence with Alessio and Chiara Beccalossi quickly arose the idea of the formation of a global gathering of representatives from existing and emerging LGBT+ History Month projects around the world.

When in November last year I contacted LGBT Youth Scotland Communications Officer Caitlin Logan about serving on the new committee as a representative of LGBT History Month Scotland, she informed me that this year’s theme in Scotland is “Blurring Borders: a world in motion.”

This theme perfectly mirrors the goal of the International Committee on LGBTQ+ History Months: supporting multiple established History Month efforts and helping others plan an inaugural event in their nation – as Norway, New Zealand, Ireland, and Cuba are looking toward.

In some areas of our world we’re experiencing what Australian historian Graham Willett has called “a Queer moment” – a surge of interest in LGBT+ history and heightened awareness about the rights of LGBT+ individuals.

History Month efforts such as Scotland’s reflect this moment and shape it by helping to, as LGBT+ History Month UK co-founder Sue Sanders calls it, “visibilise” and “usualise” LGBT persons.

At the same time, of course, hundreds of millions of LGBT+ people in other parts of the world do not even remotely enjoy the freedom to be themselves, to be secure in their persons, or to know their history.

The Action Pack for this year’s LGBT History Month Scotland addresses this concern: "As a global family, LGBT people and allies live in fragile times. Against this backdrop, we encourage you to come together and reflect on the power of people and the strength of solidarity across borders."

And so, this month in Scotland – and Wales, Northern Ireland, Hungary, and the UK – we take a bright light and shine it on the history of the struggles and achievements of LGBT+ people in our homelands and elsewhere, drawing strength from their stories and hope from their triumphs.

The same will happen in April in Italy, for the first time ever, when the Italian LGBT+ community and their allies honor the brave ones of April 1972 who stood up to the world, acted against unjust hindrances, and asserted their right to pursue peace and happiness.

Blurring Borders. A world in motion. LGBT History Month 2022 – in Scotland and around the world.

Rodney Wilson, an educator in the United States, was the first out-gay schoolteacher in Missouri, USA. In 1994, he founded the world’s first LGBT+ History Month; and in 2021 he co-founded the International Committee on LGBTQ+ History Months. He is the subject of a documentary-short called Taboo Teaching. He can be found on social media @rodneycwilson.