How you can support LGBT rights around the world

This LGBT History Month, the theme is all about looking beyond borders to LGBT rights and activism around the world. Amnesty International's Scotland Programme Director Naomi McAuliffe tells us more about the current global picture, and what we, in Scotland, can do to support our counterparts in other countries. 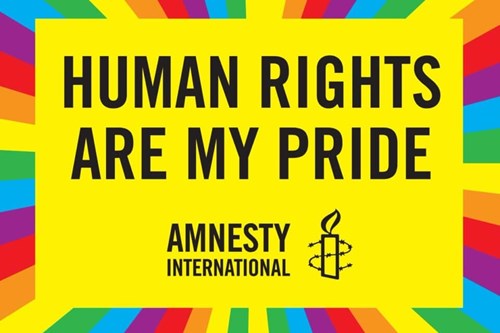 As we celebrate LGBT History Month, it is worth taking stock of the state of LGBT rights internationally. Just as we see in the UK, hard won progress is being threatened and although there have been many positive advancements in recent years, there has been clear regression in many countries.

Homosexuality is still criminalised in 69 countries; nearly half of these are in Africa. But there have been really positive moves to decriminalise same sex relationships. In Angola, they revised their penal code in February last year to allow same-sex relationships and ban discrimination on the basis of sexual orientation.

In November 2021, Botswana's court of appeal upheld a 2019 ruling that decriminalised same-sex relationships. Before the 2019 High Court ruling, engaging in gay sex in Botswana was punishable by up to seven years in prison.

The bench of five judges unanimously ruled that criminalizing same-sex relationships was a violation of the constitutional rights of LGBTQ individuals to dignity, liberty, privacy and equality.

Bangladesh elected its first transgender mayor in 2021. Nazrul Islam Ritu, who is "third gender," the official designation for transgender people in the Muslim-majority nation, beat her rival in a landslide election in November to become mayor of Trilochanpur in western Bangladesh, where she was born.

Her victory is seen as a growing acceptance of the "Hijra" community, an umbrella term for those assigned male gender at birth but who do not refer to themselves as either a man or woman.

Positive moves have also happened in recent years in Gabon, Mozambique, the Seychelles and Trinidad and Tobago. But there were backward steps in Singapore, Nigeria, Uganda and Kenya.

Many of the laws criminalising homosexual relations originate from colonial times and laws imposed by European powers. Out of the 53 countries in the Commonwealth - a loose association of countries, most of them former British colonies - 36 have laws that criminalise homosexuality.

The International Lesbian, Gay, Bisexual, Trans and Intersex Association (ILGA) monitors the progress of laws relating to homosexuality around the world. It says the death penalty is the legally prescribed punishment for same-sex sexual acts in Brunei, Iran, Mauritania, Saudi Arabia, Yemen and in the northern states in Nigeria.

In Europe, anti-LGBT movements have been particularly active in Poland and Hungary.

Despite a progressive legal framework in the EU, we have seen anti-LGBT movements in Poland where regional assemblies declared their areas “LGBT Free Zones” prompting Ursula von der Leyen, president of the European Commission, to say these areas were "humanity-free zones" and had "no place in our union".

Same-sex relationships are not legally recognised in Poland, and the country already bans same-sex couples from adopting children.

The European Parliament voted in March 2021 to declare the whole EU an "LGBTIQ Freedom Zone". In July, the commission also announced legal action against Poland and Hungary for alleged violations of LGBT rights.

Amnesty was among those who supported the case of the three Polish women charged with “offending religious feelings” for having posters of the Virgin Mary with a rainbow halo.

The case began in April 2019 when the women put up the posters and stickers around the city of Plock to protest against the “LGBT Free Zones”. The women were facing up to 2 years in prison but were acquitted in April 2021.

Blurring Borders: a world in motion

So what do we as LGBT activists in Scotland do when we hear about these situations? How do we show solidarity in a way that doesn’t recreate the colonial dynamic that inspired many of these oppressive laws?

Here are some ideas and suggestions, please add links to any actions or campaigns that you know of in the comments:

Organisations such as Amnesty, Stonewall, All Out, and many more have regular petitions and e-Actions that you can take.

You can join the Amnesty Rainbow Network to receive regular updates on LGBTIQ+ rights.

Pre-COVID, Amnesty activists would travel to countries where Pride marches were being threatened by either authorities or country-protestors.

We have supported Baltic Prides in Latvia, Lithuania, Estonia as well as activists in Turkey who protested against Pride being banned there.

If you can, travel to support Prides that are under threat but stay safe and link up with LGBT orgs in country.

Many LGBT organisations in countries with repressive laws are extremely underfunded and often run by volunteers at great personal risk.

Consider donating or fundraising for these organisations. ILGA lists over 1,700 LGBT organisations worldwide as a place to start.

For those that face persecution, violence and threats to their lives, sometimes the only thing they can do is leave their country to claim asylum elsewhere.

But for those that make it to the UK, they continue to face discrimination and humiliation at the hands of our asylum system.

Find out more about how to help from Rainbow Migration.