To mark LGBT History Month 2022, Kate Drinane of Queer Culture Ireland talks to Sarah R Phillips of the Irish Trans Archive, to help us, in Scotland, understand a bit more about the ongoing journey to equality for trans people in Ireland – and what we can learn from it.

Sara R Phillips is a long standing trans activist and founder and researcher of the Irish Trans Archive. She is the Chair of Transgender Equality Network Ireland (TENI), treasurer of the board of the International Trans Fund and sits on the boards of Transgender Europe and the National Women’s Council of Ireland. She is also a passionate music fan, and a fountain of knowledge.

Kate Drinane, queer art historian and co-founder of Queer Culture Ireland, sat down with her in a quiet hotel in Dublin city centre for a chat about the overlap between history and activism. 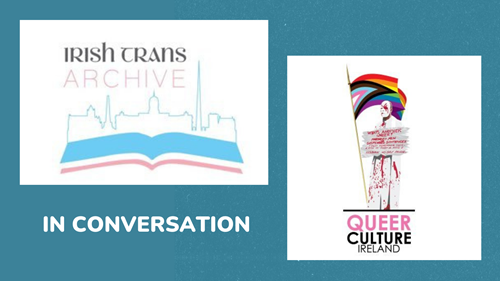 You have many, many, many strings to your bow. But activism and historian would definitely be two of those. What role do you think history plays in your life and work, and more broadly in activism in Ireland today?

History generally, and trans history especially, are actually pastimes for me. That might sound funny because I put so many hours into it, but it is one of those places I lose myself. I like researching but also sharing the stories I find.

I think a lot of it is more to do with storytelling than it is actually just the researching, preserving and archiving the history. I think it's finding and telling these stories, which frames part of my activism.

One of the key things about why I wanted to create the [Irish Trans] Archive in the first place and why I do the research was about showing that trans people have been present throughout the centuries.

It’s has been difficult to research, but there is evidence of not only trans people, but also gender variant people, throughout history and especially in Ireland. [But there can often be] a struggle to research around [historic] language.

So, it's enjoyable in that way. But my activism is much, much more.

At the moment, there are concerns over groups in Scotland framing trans rights as being in conflict with the rights of cis women. In what way have feminists in Ireland been helping to further the fight for trans rights?

In past, in the UK, you’ve had small pockets of different people fighting for change, such as Steven Whittle and Christine Burns, with Press for Change, among many others. They were key around the legislative change that eventually brought gender recognition in 2004. For the UK at the time, that was seen as world leading, but it was also, as we now know, quite restrictive.

So, I think, up until the early 90s, [Ireland was] similar to the UK. I think one of the big differences happened in 1995 at the Lesbian Lives Conference in UCD. In one of the workshops, a trans woman, Dr. Lydia Foy [Irish trans woman who fought to have her gender recognised on her birth certificate from 1993 to 2015], is actually asked to leave.

There's a bit of a hullabaloo, a couple of women are very upset that a trans woman (in their language ‘a man’) was present at this lesbian conference. The organisers didn't feel this was appropriate and that trans women should be have been accepted.

However, they hadn't really considered the situation. So, for the rest of the conference, Dr. Foy was allowed to stay. But afterwards there were a number of conversations and meetings brought together to discuss this issue of inclusion of trans women within feminist and lesbian communities.

And as a result, T gets put on the LGB very quickly and is very much part of the Irish community. By the time we see LGBT rights and activism professionalising, the LGB groups in the community were saying ‘well, we need to get some money for the T as well’.

And you have a lot of very well-known lesbians and feminists who are all central to those conversations. So, what you end up with is the trans groups being very much accepted in the wider community. This also provides the opportunity to have one voice as we advocate for progressive gender recognition legislation in 2015.

It's interesting the overlaps that occur and the similar names that pop up in Irish history and contemporary life. I was going to ask, does the size of Ireland also play part in the acceptance of trans people?

It does. It has always been difficult to form factions. If you look at society as a whole, LGBT communities are about 10% of that. The trans community is about 1% of that again or realistically, gender variant. In reality, we're talking about 0.3%. If you look at that 0.3%, is it 15,000 people?

The point is that even within those numbers, it's difficult to form factions. Because what you tend to find, even if they do, they're actually crossing over each other. We see it now when we are under attack, our main allies are other LGBT and women’s groups.

However, Scotland being part of Britain, you've got the same governance or laws, more or less. But Scotland can make its own laws, and they have wanted to update and improve gender recognition legislation for a number of years now.

The key piece right now, that we're obviously working on is healthcare. It’s a really big problem. Waiting lists here are growing and we've got serious problems with the actual service that's being provided.

On the other hand, we're also focusing on gender recognition. It's not fully inclusive, it doesn't include under 16s, and for 16/17-year-olds; the way they can access it is very onerous. And then similarly, you have people who identify as non-binary who cannot access it at all. It's a very binary piece of legislation.

And then lastly, there is the equality Acts being reviewed and hate crime legislation going through at the moment.

There is a clear and calculated attack on the community from both social media and groups that are fighting for what they say are women's rights.

[They are] trying to target trans community and specifically trans women for ‘eroding their rights’, which, as I said earlier, a lot of women's groups and a lot of feminists here in Ireland do not believe and have shown that that's not true. But there is still a concerted effort to try and attack the trans community and undermine the national organisation, TENI.

Another key thing to consider, is that gender recognition provided a situation for so many more people to feel comfortable to come out. But, in a way that has also added to the issues, services have not been able to keep up.

On the other hand, it's so wonderful that more trans people feel comfortable coming out, and coming out younger, are supported by their families, schools and friends. And, you know, that can only be good for the community in the long run, despite the problems we have.