Chris Afuakwah, Storytelling Officer for the Scottish Refugee Council, writes about the hostility of borders - particularly for LGBTQI+ people - and the need to push back against attempts to make life more difficult for people seeking sanctuary. 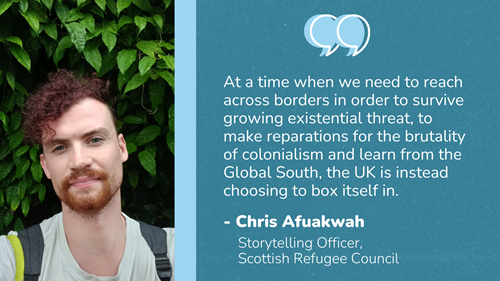 The theme of this year’s LGBT+ History Month is Blurring Borders.

Borders are hostile places for anybody, and are certainly a hostile place for people in the LGBTQI+ community. When you are facing walls and barbed wire fences, militarised police and dogs, vast expanses of land and sea, and constant threats to life, there is no place to safely explore your identity as a queer person.

My own experience of borders is from the privileged position of working at the French-UK border as an activist and I struggled with my own identity in that space, but ultimately, I could leave. That is nothing compared to the pain of people who cannot move freely across borders as a result of the lottery of birth, who are also struggling with their identity, or who have been forced to flee because of who they are.

The strength and resilience which it takes to flee persecution, to make perilous journeys, to put yourself at the mercy of governments and smugglers and lorry drivers, to continually have to hide your identity for your own protection until you are somewhere you can feel safe, only to have it disbelieved in invasive Home Office interviews, is enormous.

LGBTQI+ people need safety and community to grow and find themselves, not to face systemic queerphobia and hostility at every turn, on top of already backbreaking asylum interrogations, traumatic journeys, systemic racism and a snail-paced, unfit for purpose asylum system which prioritises profit over people’s welfare.

My favourite t-shirt, a fundraiser for Lesbians and Gays Support the Migrants, reads “not gay as in happy, queer as in fuck your borders". 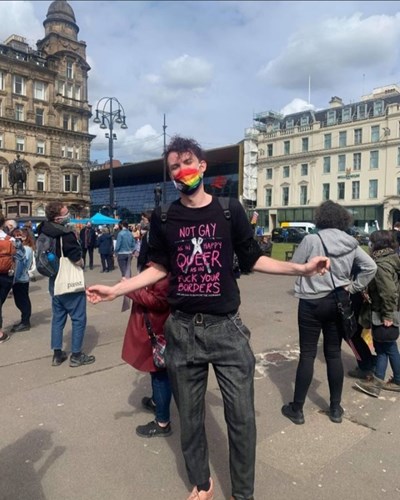 We have always been here, we exist, we live, we thrive. Borders, on the other hand, are unnatural, an unimaginative political failing, they represent human rights abuses and oppressive power, and despite all of their power in this period of time, are really just lines in the sand.

Embracing fluidity, blurring these borders, at a time when our government seeks to make everything so rigid, has helped me stay calm in a time where I just want to scream at the sky. Borders, anti-migrant rhetoric, growing nationalism, the Nationalities and Borders Bill, the Policing Bill, rising transphobia, never mind the pandemic, the worsening climate crisis – these are ugly times and they are moving fast.

I have an incredible support network and community around me, and yet despite this, it has still taken me years to accept myself and to embrace my identity, to find words that fit, to shake off unnecessary shame and confusion and remnants of those teenage words.

I am born and raised in Scotland, but my grandfather is from Ghana, where activists are currently trying to fight off a bill which could jail queer people for being who they are, legalise discrimination and force anyone who knows someone is gay to report that person to the authorities. 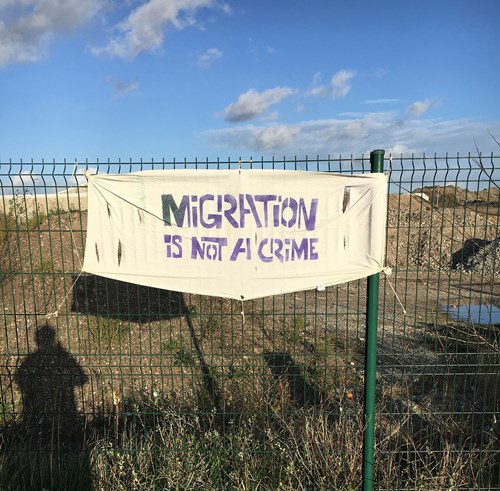 Already, a community centre for LGBTQI+ people in Accra was forced to close in 2020 following a rise of homophobic rhetoric from opportunistic politicians and anti-LGBTQI+ protests. It had only opened weeks before, and was supposed to be a safe space for the community.

This attack on safe spaces makes me think of a panel discussion I attended during COP26, organised by the Scottish Greens and held in Bonjour, a worker-owned queer bar and joyful safe space in Glasgow City Centre. A huge number of topics were covered, from the Gender Recognition Act, to building more safe spaces, to safety when walking down the street, to trans healthcare.

Alice Bah Kuhnke, a Green Swedish politician, said (and I’m paraphrasing here): “Yes, we need to take what we learn in our safe spaces and build them in the outside world. But, we also need to be prepared. Scientists are watching what’s going on right now and the parallels to the early twentieth century are horrifying. We need to be prepared to start hiding people again.”

Our government is trying to pass bills to prevent protest, to revoke people’s citizenship without warning, to suppress Voter ID, to make life more and more difficult for people seeking sanctuary.

At a time when we need to reach across borders in order to survive growing existential threat, to make reparations for the brutality of colonialism and learn from the Global South, the UK is instead choosing to box itself in. There is always money for more walls, never for a roof.

Alice Bah Kunke finished her speech by saying: “The only way we can change things is man to man. Woman to woman. Human to human. Person to person. We have to talk.”

If we are to survive what is to come, we have to talk. And really talk, not just shout at each other behind laptop screens.

We must push for a world beyond borders, beyond binaries, beyond efforts to control us, and reconnect with ourselves and our home.

Chris Afuakwah identifies as queer and is an activist and writer working for Scottish Refugee Council, running media trainings and supporting people to share their stories. Before this, Chris spent 15 months working at the UK-France border with Refugee Info Bus.